Developing a computer vision system with Human visual recognition capabilities has been a very big challenge. It has been hindered mainly by: (i) the non-availability of 3D sensors (with the capabilities of the human eye) which are able to simultaneously capture appearance (colour and texture), surface shapes of objects while in motion, and (ii) the non-availability of algorithms to process this information in real-time. Recently, a number of affordable 3D sensors appeared in the market, which is resulting in the development of practical 3D systems. Examples include 3D object and 3D face recognition for biometric applications, as well as the development of home robotic platforms to assist the elderly with mild cognitive impairment.

The objective of the talk will be to describe few of our 3D computer vision projects towards the development of a platform for assistive robotics in messy living environments. Various systems with applications and their motivations will be described including 3D object recognition, 3D face/ear biometrics, Grasping of unknown objects, and systems to estimate the 3D pose of a person. It is hoped that the talk will stimulate ideas for collaborations. 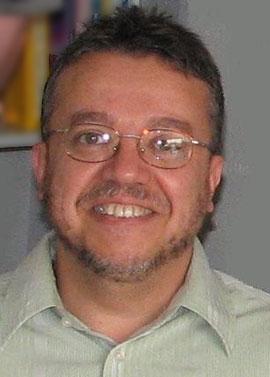 Mohammed Bennamoun received his M.Sc. from Queen's University, Kingston, Canada in the area of Control Theory, and his PhD from Queen's /Q.U.T in Brisbane, Australia in the area of Computer Vision. He lectured Robotics at Queen's, and then joined QUT in 1993 as an Associate Lecturer. He is currently a Winthrop Professor and has served as the Head of the School of Computer Science and Software Engineering at The University of Western Australia (UWA) for 5 years (February 2007- April 2012). He served as the Director of a University Centre at QUT: The Space Centre for Satellite Navigation from 1998-2002. He was an Erasmus Mundus Scholar and Visiting Professor in 2006 at the University of Edinburgh. He was also Visiting Professor at CNRS (Centre National de la Recherche Scientifique) and Telecom Lille1, France in 2009, The Helsinki University of Technology in 2006, and The University of Bourgogne and Paris 13 in France in 2002-2003.

He is the co-author of the book "Object Recognition: Fundamentals and Case Studies", Springer-Verlag, 2001, and the co-author of an Edited book on "Ontology Learning and Knowledge Discovery Using the Web", published in 2011. He published over 190 journal and conference publications, and secured highly competitive national grants from the Australian Research Council (ARC). Some of these grants were in collaboration with Industry partners (through the ARC Linkage Project scheme) to solve real research problems for industry, including Swimming Australia, the West Australian Institute of Sport, a textile company (Beaulieu Pacific), and AAM-GeoScan. He worked on research problems and collaborated (through joint publications, grants and supervision of PhD students) with researchers from different disciplines including Animal Biology, Speech Processing, Biomechanics, Ophthalmology, Dentistry, Linguistics, Robotics, Photogrammetry, and Radiology. He collaborated with researchers from within Australia (e.g. CSIRO), as well as Internationally (e.g. Germany, France, Finland, USA). He won the Best Supervisor of the Year Award at QUT. He also received an award for research supervision at UWA in 2008. He served as a guest editor for a couple of special issues in International journals, such as the International Journal of Pattern Recognition and Artificial Intelligence (IJPRAI). He was selected to give conference tutorials at the European Conference on Computer Vision (ECCV) and the International Conference on Acoustics Speech and Signal Processing (IEEE ICASSP). He organized several special sessions for conferences; including a special session for the IEEE International Conference in Image Processing (IEEE ICIP). He was on the program committee of many conferences e.g. 3D Digital Imaging and Modeling (3DIM) and the International Conference on Computer Vision. He also contributed in the organisation of many local and international conferences. His areas of interest include control theory, robotics, obstacle avoidance, object recognition, artificial neural networks, signal/image processing and computer vision (particularly 3D).