The new driver for technological innovation and disruption is the intelligent processing of vast amounts of data, including video and images to inform decision-making, to deliver economic value and to assist industry. Recently, a number of significant advances in the domain of computational intelligence research, including the ground-breaking developments in the areas of automated pattern recognition, as well as video and image processing, have been applied in the context of solving the big global challenges of the 21st century.

A number of applications are presented including research into automated document analysis systems (such as video-based text processing, multi-script handwriting recognition and signature verification), in addition to the development of automatic systems for monitoring the activities of visitors at our beaches and coastal zones, and finally software tools that can be used for the early diagnosis and treatment of such brain disorders as Parkinson's disease. Further discussion is dedicated to the future of pattern recognition systems and possible directions for attaining the goal of conscious machines. 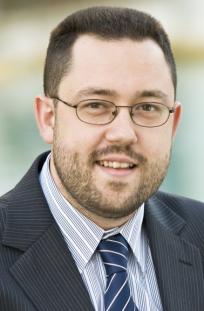 Michael Blumenstein is a Professor and Head of the School of Information and Communication Technology at Griffith University, where he previously served as the Dean (Research) in the Science, Environment, Engineering and Technology Group.

Michael is a nationally and internationally recognised expert in the areas of automated Pattern Recognition and Artificial Intelligence, and his current research interests include Document Analysis, Multi-Script Handwriting Recognition and Signature Verification. He has published over 150 papers in refereed books, conferences and journals. His research also spans various projects applying Artificial Intelligence to the fields of Engineering, Environmental Science, Neurobiology and Coastal Management. Michael has secured internal/nationally competitive research grants to undertake these projects with funds exceeding AUD$4.3 Million. Components of his research into the predictive assessment of beach conditions have been commercialised for use by local government agencies, coastal management authorities and in commercial applications.

Following his achievements in applying Artificial Intelligence to the area of bridge engineering (where he has published widely and has been awarded federal funding), he was invited to serve on the International Association for Bridge and Structural Engineering's Working Commission 6 to advise on matters pertaining to Information Technology. Michael is the first Australian to be elected onto this committee. In addition, he was previously the Chair of the Queensland Branch of the Institute for Electrical and Electronic Engineers (IEEE) Computational Intelligence Society. He was also the Gold Coast Chapter Convener and a Board Member of the Australian Computer Society's Queensland Branch Executive Committee. He is currently the Chairman of the IT Forum Gold Coast and a Board Member of IT Queensland. Michael currently serves on the Australian Research Council's (ARC) College of Experts on the Engineering, Mathematics and Informatics (EMI) panel. In addition, he was elected onto the Executive of the Australian Council of Deans of Information and Communication Technology (ACDICT). Michael also serves on a number of Journal Editorial Boards and has been invited to act as General Chair, Organising Chair, Program Chair and/or Committee member for numerous national/international conferences in his areas of expertise.