Approximately 50 million people worldwide, that is 1% of the world' population, have epilepsy  (source: World Health Organization). Epilepsy is a neurological disorder that affects people of all ages, causing recurring seizures due to abnormal electrical activity in the brain. There is no cure for epilepsy however for 70% of patients,  anti-epileptic medication can control seizures.

Electroencephalography (EEG) is one of the main diagnostic tests for epilepsy. EEG is a non-invasive technique used to measure and record the electrical activity in various regions of the brain. Several electrodes are attached to the scalp and measure electrical impulses. The electrodes are connected by wires to a machine which amplifies and record the resulting patterns of electrical impulses: the electroencephalogram (EEG). 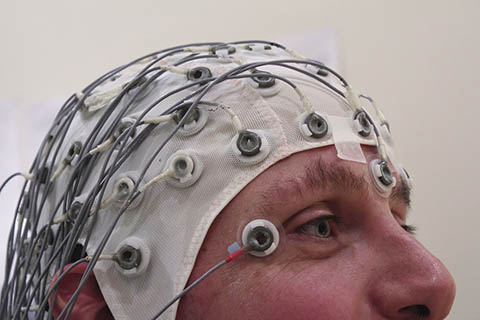 The brain activity of an epileptic patient has four major stages:

The goal of this research is to analyse the EEG signals to be able to detect the electrical changes in the brain prior to the onset of a seizure, in the preictal stage.

EEG signals vary among individuals, with the location and the number of the electrodes used.
The following graph shows the EEG signal measured during a seizure and between seizures. Although the amplitude of the signal is higher during a seizure, there are no distinctive differences between the two signals. 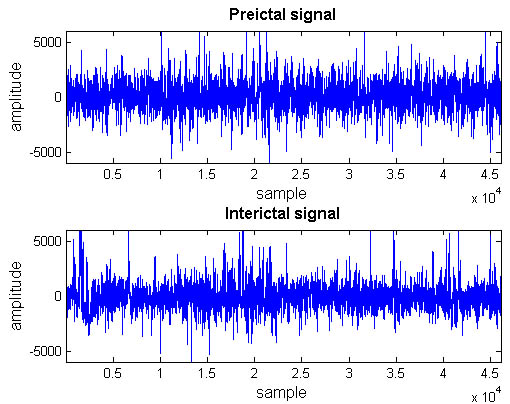 EEG Signal Showing a Preictal and Interictal Period from the Same Patient (Source: Epilepsy Center of the University Hospital of Freiburg.)

Paul's team used several signal processing and machine learning techniques. The following method is the most promising and consists of two steps:

The results showed that this method performs consistently and the classification of octal and preictal signals performance is 93.12% and 93.79% for the frontal and temporal lobe signals respectively in terms of sensitivity, specificity and accuracy.

The technique needs to be applied to datasets obtained from different patients to improve and strengthen this technique.