Water is a precious resource. Agriculture uses about 65% of all the water consumed in Australia per annum, most of which is used for irrigation (Source: Australian Bureau of Statistics).   As water demand rises in the face of an increasing population and the effects of climate change, improving irrigation efficiency has become a priority for the Australian government.

This study aims to improve water management practices and maximise water productivity by developing a model for irrigation water demand forecasting. Hence irrigation water can be delivered efficiently based on the crop type and cropping stage, and weather forecast.

CSU researchers used several data sources to build a web-based forecast tool. One difficulty was to determine the daily water usage. Rather than take an average (water delivered divide by the number of days between water deliveries), the daily water usage was estimated by taking into account water losses via evapotranspiration which included soil evaporation and plant transpiration. 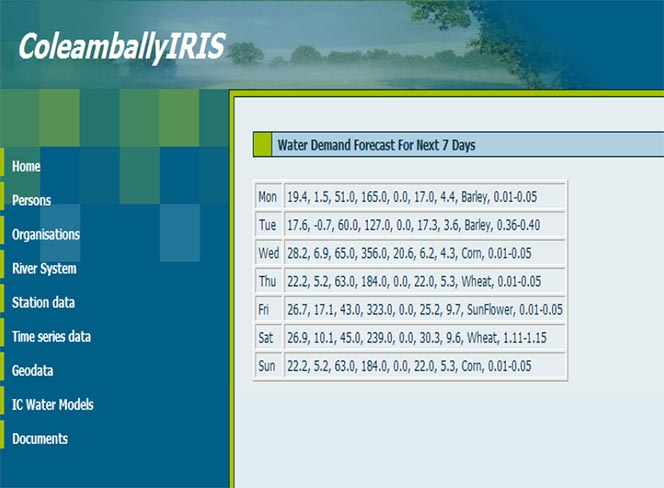 More work needs to be done using additional data such as seepage and, soil moisture as well as the the influence of cropping stage on crop water use. Such data can be added to improve the forecast capabilities of Sysfor. The water usage predictions then need to be compared to actual end-user usage.