Natural, biological and social systems sometimes undergo huge changes, which are often unexpected. Even, as with earthquakes in California, we may know that a big event is coming, but be unsure exactly when. Physicists have studied phenomena like this for a long time, wherein they are known as phase transitions, in popular parlance, tipping points.

This project has two goals: to getter better predictors of forthcoming phase transitions for the simplest systems , where they occur; and to apply the resulting theory to real-world systems by harnessing big data and large computers.

There are numerous types of phase transition, but so far our work has focused on the so-called second-order transition. Its hallmark is that everything is tightly coupled to everything else during the transition. So, when a stock market crashes, all the traders are doing the same thing -- selling as fast as possible, as panic spreads across the financial community. Thus we conjectured that before everyone and everything becomes tightly coupled, there must be a lot of information flowing backwards and forwards within the system.

Other systems may have critical states, where they operate in some optimal way, such as optimal movement of groups of agents. Flocking, or herding, behaviour is widespread in biology and society,
from flocks of birds to traffic jams. This project studies the dynamics and characteristics of flocks. So, for example, starlings congregate in groups of upwards of 40,000 and are able to fly as a coherent group, with no central planning or control. We use measures of information flow to show how this coherent state is different to the other states which might arise, such as total chaos. This project makes extensive use of supercomputer time through Intersect.

Studying predictors of impending tipping points has a number of challenges. Over the years physicists have developed what we call canonical models, which are ultra-simple models capturing all the behaviour of much more complicated and diverse real-world systems. Thus we can look for new measures in these simple systems first. But even these simple systems can be very difficult to
study. It's very rare that we can find a closed-form (ie and explicit formula) for the behaviour. We have to simulate it, and this requires huge amounts of computer time. It needs much, much bigger resources,
than are usually found on the desktop.

When we move to real-world systems, such as, say modelling traffic jams, a big challenge is untangling all the different factors, the weather, roadworks, speed cameras, price of petrol and so on, which influence traffic density. Only some of these, or a combination of them, will be represented by the small number of parameters in the canonical system.

One other challenge is close to solved at the time of writing towards the end of 2015. To obtain statistically reliable results for real systems, we need lots and lots of data about how a system behaves over time. The current Zeitgeist for collecting anything and everything, creating the yottabytes of data on everything from climate change to social networks, is going to provide a lot of the data we would need.

Finding neat mathematical solutions is usually almost impossible, thus we have to rely on simulation, particularly Monte Carlo Methods. This name comes from Monte Carlo itself, famed for its casinos and
gambling. Thus we look at what happens near a tipping point with many simulation runs with different parameters. Each run is different because, many random numbers are needed for decisions along the
way. So, in a traffic simulation, the speed of the cars would vary randomly, decisions, along with overtaking, stops, direction and so on. Simulations run on the large computers provided by Intersect and Australia's largest computer, raijin at the National Computing Infrastructure in Canberra.

The first system we studied was one of the oldest and well-known models in physics, the Ising Spin Model. This consists of a rectangular grid in two dimensions, where each square is occupied by an entity we call a spin. For the model the only thing that matters is that this spin can have just two states, up or down. Each spin is influenced by its neighbours and how hot the system is, how likely the spin is to flip states all by itself. This ultra simple system, nevertheless, has extremely complex behaviour and many thousands of research papers have been written about and Onsager received the Nobel Prize for the first analysis of the phase transition which occurs at a particular temperature.

We were able to show that information flow among the spins in the model, peaks, not at the phase transition, but as we conjectured above, before the transition occurs. In the figure below the information flow, measured by a quantity  called the global transfer entropy has its maximum value on the
right hand side, green line, (technically this is the high temperature side), of the transition shown as the vertical red line. 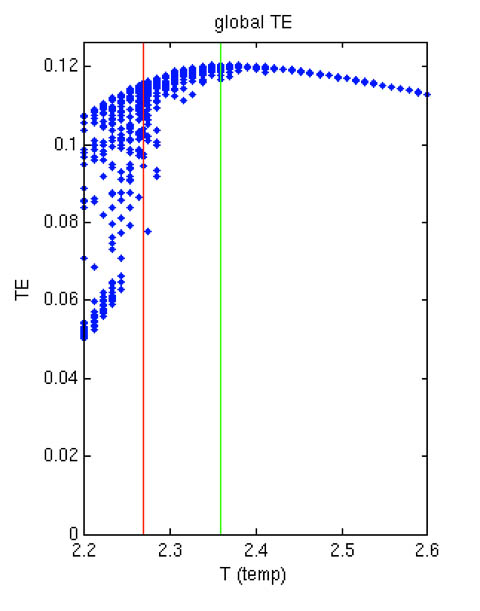 To study flocking we used another canonical model the Vicsek Model, in which particles move partly at random and partly influenced by their current neighbours. As you can see in the video, at one particular temperature, they model has quite different behaviour, with large flocks forming and breaking up in an endlessly changing pattern, very much like what we see with real starling flocks. 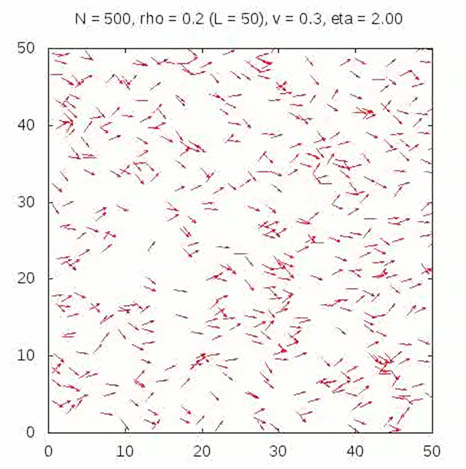 The video shows the appearance of a tipping point, more precisely a second order phase transition, in a canonical flocking model (the Vicsek Model). The temperature (ie noise level) is shown as the parameter \eta in the top right hand corner . The video begins at high temperature, where the particles moves in a random fashion. As the temperature is reduced a phase transition begins. The noise stays constant at \eta=1.2, during the transition. Here flocks form and break up rapidly in an endlessly varying display. The temperature then falls to zero, where the flocks gradually increase in size, which would lead eventually to a single flock travelling in a single direction. This transition is another way of representing three dynamical behaviours -- random/chaotic, complex and coherent (periodic or point attractors).

This is partly blue sky research, where we are trying to understand the dynamics of tipping points at a fundamental level. But we are currently working on three practical applications. The first is in the world of finance, the crashes which occur from time to time in stock markets. The economic impact of such crashes is huge and any extra predictive tools, could save trillions of dollars.

The second application is ecological. When a species goes extinct, there is no going back, but sometimes it can be hard to tell a trend towards extinction from the natural fluctuations in numbers due to many non-terminal factors. We are working with IMAS at the University of Tasmania, where a lot of work has been carried out on the dynamics of seaweed covering the reefs in the ocean just off the coast, a nasty seaweed predatory, the spiny sea urchin and the giant rock lobster.

Seaweed is very important to reefs, since it provides a sheltered home for many other marine dwellers. But the sea urchin can eat all the seaweed in a reef, causing bleaching, ie turning whole reef areas white. The sea urchin's only natural predator is the giant lobster. But these lobsters live to a great age, 70 years or more, and grow very slowly. Unfortunately these big lobsters are not only rare, but also the most desirable for commercial fishing. Thus it is extremely important not to fish the lobster to extinction, thereby allowing the sea urchin to multiply and wipe out the seaweed.

The third application results from the large social shift to online shopping, something we think is itself a tipping point. Some types of shop, such as specialist CD and record shops, are almost extinct, while bookshops may not be far behind. The flow-on effect of this is that the large shopping malls which are a feature of many towns, may also become endangered. In fact some malls have indeed gone bankrupt and have become the home for rats and birds.

In a beautiful example of the way simple systems can apply to many natural systems, we have been able to use the same model developed for the lobster problem to the quite different shopping mall problem. 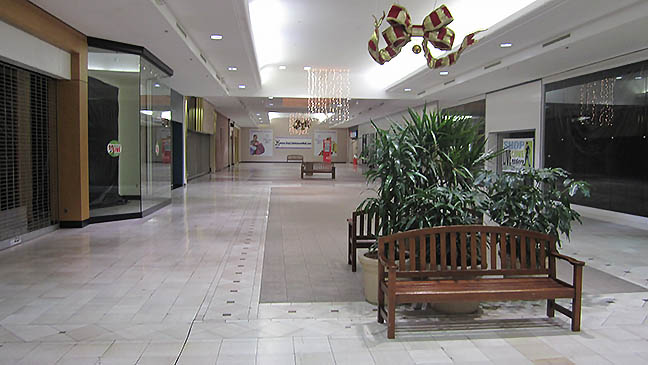